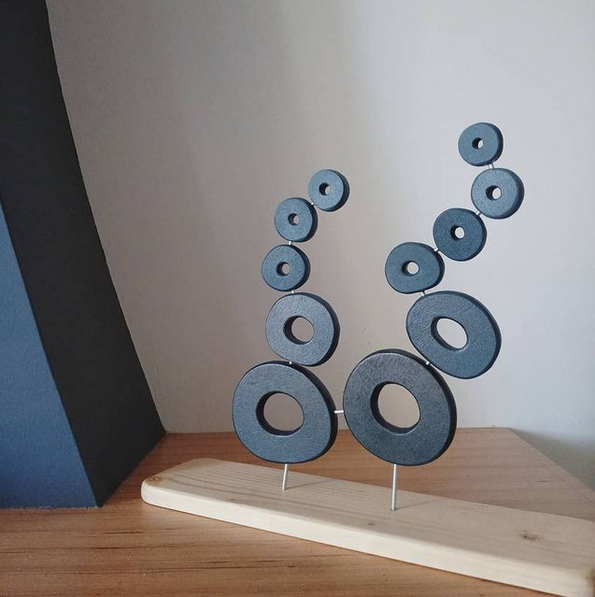 (a tiny fraction of it – una minuscola parte )

In a nutshell – In breve

In December 2017 she shows in a 3days solo exhibition called “..A” where she explores a new path in her art.
Time is read to make a huge leap…

In June 2020 she launches the international Baci Sospesi project, with sculptures and audio interviews. A research on the man-woman relationship and on those transformative moments that derive from the relationship. The interviews are available here on this site under “bacisospesi” menu tab. The first installation, almost 3 meters high, is set on the seafront of Passoscuro, north of Rome.

A series of “home edition” #Bacisospesi sculptures was born since October 2020, all unique handmade wooden pieces.

From 18 to 28 May 2002, at the Arte IN Association in Rome, she exhibites together with Enzo Gravante, Coralba Libra, and Patrizia Ricchiuti, with the patronage of the Academy of Fine Arts in Rome, in a group exhibition named (for her part) “Le Linee di dentro (The lines of whithin)”.

From 21 to 28 September 2002 she exhibites with a solo named “Dimmi, senza parlare” in Rome at the Association Il pane e le Rose Art Space.

From 8th to 22nd March 2003 she exhibites together with Pier Paolo Parogni and Mario Antonio Pelosi, in Rome, at the GARD art gallery in the exhibition “Il segno e il Volume (The sign and the volume)”.

In 2007 she publishes with D’Arco Edizioni a book entitled “Umano come me (Human like me)”, an anthology of works and poems, accompanied by an exclusive CD by Stefania Tallini (piano) and Gabriele Mirabassi (clarinet).

The album, entitled “Pasodoble”, becomes the leitmotif of the show-event held at the Teatro Eliseo in Rome from December 9, 2007 to January 4, 2008. A video here.
At the inauguration on December 9, pianist and composer Stefania Tallini , in quartet with Gabriele Mirabassi, Nicola Angelucci and Gianluca Renzi, play exclusively for the artist the music from PASODOBLE.

On December 16th, composer Arturo Tallini and singer Marilena Paradisi present, within Sbrocca’s exhibition and exclusively for the artist, their concert-project “Intuendo. Trasformazioni per voce e chitarra. (Sensing, transformations for Voice and Guitar.”

From 2007 to 2012, Sbrocca works with Master Printer Antonio Sannino (Stamperia Nazionale Italiana Istituto centrale per la Grafica) and among other things she produces two limited editions prints of “Light” and “Pasodoble” in etching.
For more information on Master Sannino (R.I.P.) see this number of Sofa on page 69.

From January 29 to February 3, 2008 she participates in the collective “Art and Eros” at the III Millennium Art Gallery in Venice.

From 12 to 20 December 2009, on the invitation of Count Alessandro-Ferruccio Marcucci Pinoli of Valfesina, Nani for friends, Sbrocca exhibits with a solo titled “CLOSER, intimità di un’immagine (CLOSER, intimacy of an image)” at Alexander Museum Palace Hotel in Pesaro. At the inauguration, pianist and composer Stefania Tallini exclusively holds for the artist a solo piano concert.

In the issue # 50 of “Inside Art” monthly Art magazine, in January 2009, in the section entitled “Word of the Artist” an article by Barbara Sbrocca is titled “Nudo d’autore” from page 86.

On issue # 7 of February 2009 of the quarterly Sofa, a long interview with the artist signed by Maurizio Zuccari.

From 8th to 11th April 2011 she participates in the collective “Women in the Arts” organized in Rome from the first Home Art Gallery “Artrom Network” (special guest Philippe Daverio).

Since 2013 she has a brand – Himbarossa – with which she signs jewelery in silver, murano glass beads (made by herself) and ebony.

In September 2016, at the invitation of the Soqquadro art association, she participates in the collective “Legàmi (Bonds)” at the International Women’s House, included in the AMACI Contemporary Day, an exhibition conceived for blind and visually impaired artists (and visitors). For the occasion, Sbrocca creates a work, titled “In ogni momento (At All Times)”, which also includes a braille sentence, drawn from a poem by the Psychiatrist Massimo Fagioli.
A picture here.

Between March and May 2017, she works on Monica Palladino‘s first book, named “Ondeia. Racconti d’acqua e di pesca: le voci della Costa Viola“. Sbrocca took care of the title, the concept, the complete layout,  and all the drawings.

In December 2017 Sbrocca showed her new collection of paintings in a solo show, entititled “..A” (point point A), which was held in Rome at the Casa della Cultura Villa De Sanctis (via Casilina 665).

In September 2018 Sbrocca took part in Per Appiam 2018, organized in Rome by Ipazia ImmaginePensiero Onlus, with her composition dedicated to Luigi Pirandello’s “I giganti della montagna”. Her 2 paintings are “Dentro la notte che sogna” and “Il Mago”.

In February 2019 Sbrocca participated at “INSIEME” a special exhibition organized by Ipazia ImmaginePensiero Onlus to celebrate 5 years of collaboration with Arvalia.  Every painter was asked to work on paper (handmade paper): 4 sheets of 20×20 cm paper. Sbrocca participated with “3D Tango (slice of life)”.

In 2019, the catalog “A barefoot in art, the murals of Passoscuro” is released by the Isola delle Correnti Association. Presented at the MACRO museum in via Nizza on October 9th, the book tells the genesis of the project that saw the creation of dozens and dozens of murals in the village of Passoscuro. Sbrocca is present in the catalog with 2 murals.

In August 2019 Sbrocca exhibits with an instant show in Passoscuro (Fiumicino) in a solo exhibition entitled “Centrifugo – Centripeto” by the sea, at La lampara.

In February 2020 she shows with her solo exhibition “Centrifugo – Centripeto” in Ostia for 10 days.

In October 2020, Sbrocca organized and curated an Event called “Il mare in discesa” with the paintings of Quinto Tozzi and the poems of Silvia Luminati. Held in Passoscuro, the event lasted 2 weeks.

SIDENOTE: this curriculum only refers to Sbrocca’s artistic carreer. For more Info about her activities, please visit her linkedin profile.

NOTE: all works (sculpture-paintings, jewelery, furniture, etc.) are unique pieces except for the soft cut prints on paper, which are all limited editions (max 10 prints per subject).

(some of the reviews)

Barbara Sbrocca finds a field of action that allows her to experiment and come up with very personal language solutions … With full-bodied expertly deployed signs, she combines synthesis and eloquence, harmony and contrast … through a research free  from academic constraints, Sbrocca arrives at that which is the purpose of art: to narrate moods, to communicate suggestions, atmospheres, sounds.

The image, the design, the shape, the sign suddenly erupt, as suggested or precipitated by listening … in the works of the painter you fall into a music-like beauty, in an exclusive semantic contradiction. A new world … Barbara Sbrocca finds a singular originality of expression, something other, which has no comparison either for techniques used or for the results, said in this wonderful language possible.

I find myself crossing an unfamiliar landscape that I think to travel one way, in one direction, along the coordinates, while I’m immediately upside down, forced to change my gaze, perspective … distance. For Barbara this challenge is the human imagination that now stretches horizontally and vertically, oblique, bends, shows unexpected matters, lines that escape a rational classification.